Main page
About Security Service of Ukraine
News
Search
To the public
For media
Укр.   Eng.

SBU established the new facts of criminal activity of the Russian special services in different countries of the world, in particular, against Ukraine. The SBU published a dossier on two more Russian mercenaries involved in crimes of the Kremlin.

Simunyak Oleh Vitaliyovych, born in 1968, a citizen of the Russian Federation and the Republic of Serbia (photo). Participated as a mercenary in the combat operations in Georgia (1992), Bosnia (1993-1995), Kosovo (1999), Macedonia (2001). After the Balkan events, he became the close associate of the Russian citizen Hirkin-“Strelkov” (currently on the wanted list, accused in creating a terrorist organization) and Aleksandr Kravchenko (head of radical Russian-Serbian organisation “Kosovo Front”, a key recruiter of Serbian contractors for combat operations in Eastern Ukraine and Syria).

In 2003-2004, Simunyak, using the established contacts with members of Russian extremist organizations, planned terrorist acts in Greece (blowing up a motorway and the stadium) during the summer Olympic Games. According to the agreement on cooperation that was in force at the time, the SBU provided the FSB with the operative information on Simunyak searching for the accomplices of the terrorist act on the territory of Russia and Ukraine. Subsequently the FSB officer provided Simynyak with the SBU information and instructed him to stop the activities in Ukraine and return to Russia.  Subsequently, Simunyak was repeatedly used by the Russian special services as an agent provocateur in the national-patriotic environment, in particular, in the case of the Colonel of Russia’s Armed Forces V. Kochkov.

According to the SBU materials, the resident of the Autonomous Republic of Crimea Ivkin Oleksiy Valeriyovich, born in 1975, in February-March 2014, being part of the so-called “9th self-defense squadron of the Crimea”,  in cooperation with the servicemen of the Russia’s Armed Forces, was engaged in seizure of government power during the Crimea annexation. Subsequently, the FSB used Ivkin as a witness of a prosecution in the fabricated criminal case against Akhtem Chyigoz, deputy head of the Mejlis of the Crimean Tatars. In order to conceal his belonging to the intelligence network of Russian special services, Ivkin provided false testimony that he allegedly received the passport of a citizen of the Russian Federation in 2014 after the annexation of the Autonomous Republic of Crimea (letter of evidence No. 10).  Yet the available documents clearly indicate that Ivkin received the passport in September 2002 (photo). 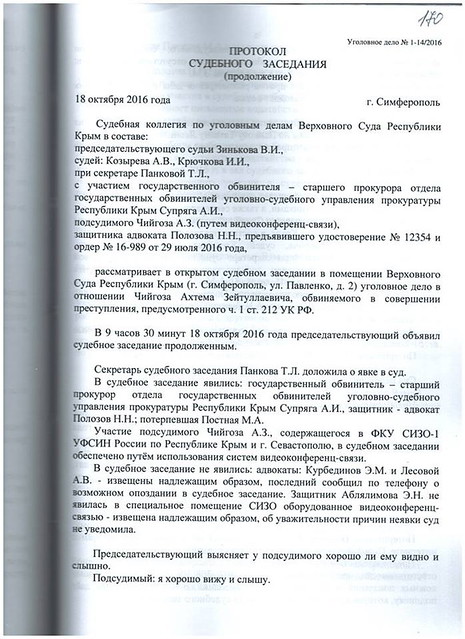 Since the summer of 2014, Ivkin participates in hostilities against the ATO forces in Donbas and in Syria as a part of the tank squadron (personal number M-0802) as a mercenary of the PMC Wagner. The SBU is verifying the operative information on Russia’s intelligence services transporting Ivkin to the falsified court process against Akhtem Chiygoz directly from Syria.

For the Attention of the SBU Head